There were three categories: lyres- kithara, trigono- harps and pandourides (shaped like a tamboura). There are no records of the use of bows and all stringed instruments were played by being strummed.

Lyres and the kithara, along with the aulos, were the most popular instruments in ancient Greece. The lyre originates from Mesopotamia. The first records concerning lyres come from the palace of Pylos and Crete (1400 BC). The lyre was associated with the Greek god Apollo. According to ancient Greek mythology the god Hermes invented the lyre. Apollo pursued Hermes when he found out that Hermes had stolen his oxen. The fleeing Hermes stumbled on a tortoise shell and noticed that it enhanced sound. He constructed the lyre and gave it to Apollo to appease his wrath. 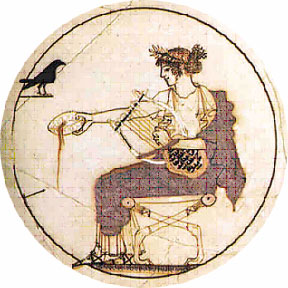 Apollo with a lyre

Two arms are fixed on a cavity resonator made by a tortoise shell or carved from wood. A crossbar connects the two arms near the top. The strings are of equal length and made from wound up dried intestines, nerves or flax. They are fixed on a specific point (chordotonion) on the resonator, stretched over a bridge (magadion) and wound around the crossbar near the top, fastened with pegs to enable tuning. The chords were originally 3, later on there were lyre versions of 4,5 and 7 strings and in the "new music" period there were 12 strings. The lyre was played with the right hand fingers or a plectrum made of horns, wood, bone or metal. The left hand assisted by playing specific notes, pressing them or stifling the sound. Each chord had a different name corresponding to the notes (see next chapter). There are various types of lyre, each named differently: forminx (the oldest type), kithara, lyra, chelis (from the Greek word chelona = tortoise), varvitos (with long arms). These terms are usually connected with the lyre's use.

The trigonon is a small harp with many strings, which is held on the lap. It can be found in the Middle East as far back as the 3rd millennia BC. In Greece, records of its existence can be found in artifacts of the Cycladic civilization. (Pict.2)

The pandoura or trichordo had a long arm, a resonator and three chords. It was similar to the tamboura and played with a plectrum (Pict. 8). It was rarely used in Greece and its origins were known to be Assyrian.

They are distinguished into to main categories: Auloi (with a reed) and syringes (without reed). Other wind instruments were also used, although not as commonly, like the salpinx (trumpet), the conch and the hydraulis.

Auloi. The aulos (=pipe) is one of the most cherished musical instruments in ancient Greece. It can be found in artifacts dating back to the middle of the 3rd millennia BC (Cycladic figurine, pict. 9). It was probably created in Minor Asia and transmitted to Greece through Thrace.

According to Greek myth, it was created by the goddess Athena. Athena saw her face distort in the water while she played it and threw it far away to Frygia. There, it was found by Marsyas. Marsyas became an excellent player of the aulos and challenged Apollo to a competition. Apollo won the competition and punished Marsyas by hanging him and flaying him alive (This myth can be seen as a representation of the struggle of the indigenous art against foreign invasions). The extensive use of the aulos begins after the 8th century when it gradually accedes to a prominent position in Greek music and especially in the worship of Dionysus.

The aulos is a pipe made from cane, wood, bone or metal with holes on it. Opening and closing different groups of these holes produce the different notes. It also has a mouthpiece with a single or double reed (like the zurna). The player usually played two aulos simultaneously, which he tied together and strapped to his head by a leather band called a "forbeia" (pict.10). 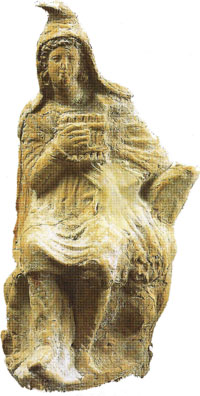 Syrinx. Ancient Greeks used the word syrinx to refer to the pan flute (pict.11). It consisted of a series of 3-18 stop pipes tied together with wax and flax with vertical supports. Sound is produced by blowing across the top of the open pipe at a certain angle. It was commonly used by herdsmen and therefore attributed to the god Pan. In Plato's "Politeia", the philosopher encourages citizens to play the lyre, kithara and bucolic syringes exclusively and to reject the use of pan flutes and multi-chords, which he deemed vulgar. 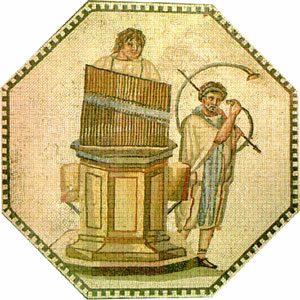 The hydraulis is the first clavier musical instrument in the world and a predecessor of the pipe organ. The Greek inventor Ktisivios created it in the 3rd century BC, in Alexandria. It consists of a set of pipes, with or without a reed. The player (pict. 12) supplies air to a selected pipe through the use of specific keys. The steady supply of air pressure is provided by a hydraulic system.

The copper salpinx was known from Messopotamia and Etruscan civilization. It was used in battles, chariot races and public meetings to sound signals. It is an instrument dated in the late antiquity. Besides the copper salpinx, seashells with small openings at their base (called the "bourou", pict.13) or horns were also used to produce signals.

It was a rhomboid or trapezium shaped instrument carved from wood and tied with rope. Spinning the instrument produced a clangor-like sound. It was used in annunciation ceremonies and in battles to frighten the enemy. 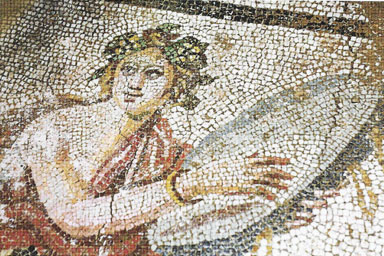 They were used like contemporary castanets. They consisted of two pairs of 10-15 centimeters hollow pieces of wood, which were held in each hand. Sound was produced by clicking them together.

It looked like a large dayereh. A round piece of skin is stretched over a wooden frame on one or both sides of the frame. The timpano was played much like the dayereh today. The skin membrane was tapped at the centre with the palm of the hand or at the rim using the fingers. (Women only played the timpano for it was deemed a disgrace for men to play it.)

They looked like small contemporary clash or ride cymbals and were of Asian origin. They were used in worship rituals.

Sistrum.
The sistrum originated in ancient Egypt. It consisted of a handle and a U-shaped frame with crossbars. Shaking the crossbars onto which small rings or loops were attached produced sound.

Music was highly developed in ancient Greece and constituted the cornerstone of future music culture. Many of the contemporary musical instruments have their origins in that time.

1. What were the mythical entities you encountered in this chapter and how are they connected to music?

2. What kind of musicians can you see in picture 4?

3. Which musical information is not provided by historical records?

4. Which of the musical instruments mentioned are of foreign origin? Where from?

5. What contemporary musical instruments do you know that resemble those of ancient Greece?