Ancient Greeks believed that melody without rhythm is "disordered, inert and dark" while it was "vigorous, energetic and precise" when rhythm was added. Indeed, sometimes they characterized melody as the female element and rhythm as the male.

Rhythms were measured with two distinct values called "times": the long and the short one, which often corresponded to the long and short vowels. Their symbols were: long and short. The ratio of long to short time was not a fixed value. In some occasions the ratio was 1:2 and at others it was 1:1½ (or 2:3). We have no knowledge of how the use of the first or second ratio was determined. In later Greek music tradition, as well as in other Eastern Mediterranean cultures, we often encounter the 1:1½ ratio, which leads us to the assumption that it must have been very common in ancient Greece as well.

The combination of these "times" creates specific rhythmic patterns, called "podes" (Greek for feet) or "meters" (meters consisted of one or several podes). The patterns, which corresponded to both poetic meters and dances, were standardized in the postclassical period in the following forms:

Every metric podas is separated into two parts: one called "arsis" (greek for lifting) and one called "thesis" (Greek for placement) corresponding to the rise and fall of the foot. The terms arsis and thesis are used in Western music to this day. 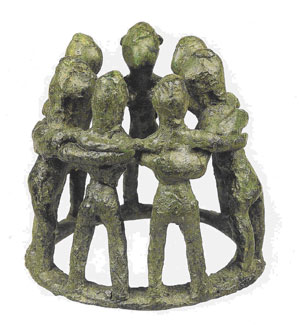