The oldest musical instrument that has been discovered dates back to the Middle Neolithic era (5000 BC). It is a single-hole whistle made of carved bone (pict.1) found in Thessaly and is exhibited in the Museum of Volos.

Evidence also exist in Minoan and Mycenaean civilization (2nd millennium BC) where the lyre, the sistrum and finger-cymbals (comparable to the castanets). In Homer’s epic poems there 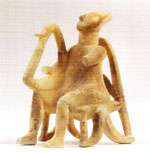 are many references to music and we know that poets recited the poems themselves or sang the poems accompanied by a kithara (a seven- stringed lyre).

In religious ceremonies, important figures like Apollo, Dionysus and Orpheus are directly connected to music.

During the Archaic Period the nomoi are established (musical pieces for aulos, kithara or/and voice in seven parts, characterized by a very strict structure). The seven-stringed lyre is also established during this period and the musical contests (kithara, aulos and/or voice) are founded at the same time with the Olympic Games.


In Classical Greece, music had incorporated the musical traditions of neighboring cultures and acquired a specific form and system. Tragedy and comedy are directly connected to music (practically the entire text was set to music). Philosophers like Pythagoras, Plato and Aristotle explored the connection between music and mathematics, philosophy and the human soul. Standardized pieces are created like the paean (hymn accompanied by the kithara in honour of Apollo), the dithyramb (hymn accompanied by the aulos in honour of Dionysus), the hymn, the thrinos (Greek for lamentation), the hymenaios (a wedding song), and the skolion (a song for wine-drinking accompanied by the aulos or varviton (a variation of the lyre).

In 5th century BC, a new form of music with a greater variety of notes, melodies and expression is formed. In the years to come, texts on musical theory are written, notation is crystallized, new instruments like the hydraulis (a type of automatic pipe organ using water as a power source) are created, Greek music spreads throughout the Hellenistic world, evidently influencing music in other cultures; like those of Rome and the Middle East and constitutes the international musical system until the early Byzantine Period. Later on, Byzantine music as well as Western music has built on this music tradition whose mark is evident to this day.

Basic records on the music of the ancient Greek civilization are:

• Sculptures; statues, carvings, figurines
• Depictions on amphorae, wall-paintings and mosaics
• Ancient texts describing the music system, notation, instruments, relations to philosophy and mathematics.
• References in other texts (by Homer and historians) describing the use of musical instruments or the music in practice.
• Remnants of ancient Greek musical instruments (usually found in tombs and temples)
• Pieces of music (songs, hymns and passages from Greek tragedies) written in ancient Greek notation on papyruses or carvings (almost 50 of which are extensive) 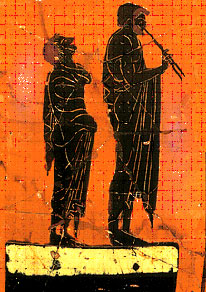 These records allow us to attain a fairly accurate idea of the music system, the instruments, music life and philosophy though they don’t quite aid us in the reproduction of timbre in these pieces of music. For that reason, reproductions of these records generally differ from each other. Perhaps the research of indirect references and comparison to neighbouring music cultures as well as contemporary music will enable a more accurate reproduction of ancient Greek music in the future. 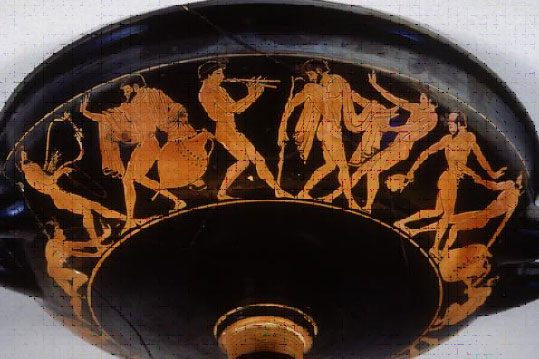 
The term “music” derives from the Greek “Musa” (singular form for the 9 Muses of antiquity who embodied the arts). Originally, every artistic or spiritual activity was called music. In Plato’s “Politeia” (The Republic) he mentions that “Music is for the soul what gymnastics is for the body”.

There was no specific term for music but according to the type of musical performance the corresponding terms were used. At least five of the nine Muses were protectors of different types of music performance. The term “music” as we use it today, was established in the 4th century BC. Today, all western languages utilize some form of the Greek word to refer to the art of sound (music, musik, musica, etc.)