1. From the 1st century to the foundation of Constantinople (330 AD)

After the crucifixion of Christ, the first Christians gathered secretly to worship God. They utilized simple tunes known to them from everyday life. Subsequently, those chants contained musical elements from the Jewish, Syrian, Palestinian and Roman culture, as well as from the music tradition of the ancient Greeks (Alexander the Great had greatly contributed to the spreading of Hellenistic culture in the Middle East).

The first Christian hymns were not new compositions, but rather paraphrases (new text on known melody) or variations of older known melodies. The chant was syllabic (one or two notes per syllable) and monaural (all sang to the same melody).

Due to the religious persecution of Christians, there was no tendency to modernize and hymnography remained stable and simple for centuries. Important hymnographers in these early ages were Clement of Alexandria (170-220), Justinian (philosopher and martyr), Methodius (martyr in 312) and Anatolias.

Pict.1 Scene from celebrations in the palace from an 8th century codex.

The following abstract comes from a 3rd century hymn dedicated to the Holy Triad.
It was discovered in 1918 in Egypt on a papyrus written in ancient Greek notation.

Following the foundation of Constantinople (330 AD) and the establishment of Christianity as the formal religion (379 AD), ecclesiastic music started to get organized and developed more freely than in the past. Between the 4th and 7th century the Church’s liturgical services solidified, the Ecumenical Councils settled liturgical issues and new hymns were created to fill the emerging liturgical needs. This was a transitional period in the history of hymnography, for while new hymns were written, the melodies remained almost unchanged, following the rules of older times, the rhythmic prose and older melodies. Monasteries avoided the use of psalms during the liturgy, while in major urban centers of the East hymnography began to develop beyond the existing tradition of psalms. There was a conservative attitude towards psalmody, the melody of certain hymns solidified and the anonymity of the composers continued to be supported.

However, some of the significant composers of that time are known to us, such as Cynesius of Kyrenia (375- 430) and Gregorios of Nazianzus (died in 389). There was no distinction between passive listeners and active choristers until the 4th century; all present chanted “with one soul and one voice” and music was an activity which involved everyone. Due to the development of psalmody, churches began appointing choristers for it was impossible for the whole congregation to memorize the new compositions. However, the chorister’s duty was to instruct the congregation with hand movements (gesticulation) and prompt them to answer.

New melodies started to be released from the 5th century and several elements of world music influenced ecclesiastic music. Due to pressure from the Fathers of the Church, priests began to compose not only lyrics but simple style melodies as well, avoiding world music infiltrations.

New kinds of music were created in this time period, like odes, troparia, kontakia but the composition of melody remained relatively plain. During this period, ecclesiastic music spread to Western Europe and gradually evolved to Gregorian chant. Some of the known melodists of that period are Saint Anatolios (-485), Saint Romanos the Melodist (5th-6th century), Andreas the Cretan (660-740) and the Patriarch of Constantinople Sergios (7th century).

The troparia were simple texts with psalm lines interferences and easy melodies.

The kontakia consisted of an overture and 20-40 similar verses (houses). A well known kontakio is the Akathistos Hymn dedicated to the Virgin Mary and attributed to Romanos the Melodist.

The time period between the 8th and 11th century is the time when the core of Christian ecclesiastic hymnology is moved to Constantinople and more music innovations are being used. This period is closely connected to a peak in several forms of art, literature and music. Monasteries became the centers of hymnology and monks embarked on hymn composition importing innovations to ecclesiastic psalmody. Saint Ioannis of Damascus (7th-8th century, pict.3), Christian hymnography innovator, managed to liberate ecclesiastic music from world influences and to systemize the scales in manner or sound which led to the oktoichos (eight-sound), as it is used to this day. He is also known for inventing the kanona (rule).

The Kanonas is a compilation of hymnscomprised of nine odes which have intertwined meaning. Every ode consists of a primary tropario (the eirmos) followed by three or four other troparia with different texts but similar meter and music. The nine eirmoi follow a different meter and thus the kanonas contains nine independent melodies.

In the 10th century, the Church’s texts were filled with hymns on every liturgical occasion and therefore the need for creation of new hymns was limited, while the main interest shifted towards the development of melody. Saint Ioannis of Damascus promoted many of the basic characteristics of monophonic ecclesiastic music. He created a more melodic kind of psalms (melismatiki), parallel to the existing monophonic and less melodic style and he invented a new kind of notation of verse and melody. Thus, while up to the 8th century only the eirmologiko (coherent- one symbol per syllable) and the stichirarchikopapadiko style (of priests) which was the most elaborative and melodic of them all. He also composed cherouvika, social, allelujaharia, kratimata, style(chain of verse- a small melodic plot per syllable) existed, Saint Ioannis of Damascus created the polyelaious etc. 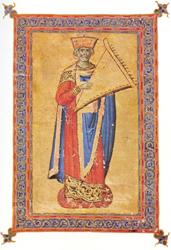 Since that time, the ecclesiastic music of Byzantium has known further development and music notation solidified. Development continued even after the fall of Byzantium. It was revised in the 19th century and remains vivid to this day.

Characteristics of ecclesiastic music in Byzantium

The music of the Orthodox Church, like every living music tradition, has gone through important changes in its long history, but most of its characteristics remained the same for many centuries. These are:

The technique of paraphrasing is verified for the time period of Saint Efraim; new texts were written over well known previous or even world melodies. The hymns at the flourishing period (5th- 7th century) have always had their own melody, which on later occasions was not set to music by the poet but by the melodist. As was the case with texts, which followed tradition in theme and form using solid type, so was with melody which used specific melodic turns, shapes and drops.

Other forms of hymn are the apolyticion (dismissal hymn- referring to saints and celebrations), the kathisma, the polyelaios, the litourgiko (hymn of the Divine litourgy like the cherouviko and the koinoniko), the prosomoio (standardized melodies applied on different verses) and the idiomelon (autonomous compositions with idion = their own part). The hymns of liturgy and service are contained in special liturgical books:

The parts in Heirmologion and Stichirarion are syllabic containing few ornaments on important words (see the example above on “Canon”), pauses, drops and endings. The purely ornamental hymns increase in number in the 13th century and are numerous in the 15th century.

The period of Middle Byzantine Part (14th-19th century) is mainly characterized by new hymn composition, especially those by Ioannis Koukouzelis (14th century) and additions to the notation, thus becoming more complex and elaborate.

The New Byzantine Part dates back to 1821 and is characterized by the renovations implemented by the Episcope (bishop) Chrysanthos of Madyta which mainly concern the simplification and standardization of notation in its present day form.