We know little on the social music in Byzantium. There is some information on music in the palace in a 10th century book by Konstantine VII the Porfyrogennitos (905-959). Many instruments and music ensembles are also depicted in monasteries throughout Greece and in ecclesiastic manuscripts (codex). Social music works are rarely found in Byzantine manuscripts. Our sources tell us that music was implemented in all everyday activities, like celebrations, feasts, theatres, horse races, games, receptions, and royal galas. The palace had also established stringent rituals equivalent to the ones established by the Church.

Social music in the imperial court in Byzantium, like ecclesiastic music, was connected to rituals with strict rules. The music itself has not been preserved but descriptions of it have been found in different sources, like the Book of Rituals written by Konstantine VII the Porfyrogennitos (905-959). However, the music must have been similar to ecclesiastic since it used the same system of sounds, same rhythms and performance methods. We know that there were antiphonal choirs and songs accompanied by musical instruments, including the pipe organ (musical instruments are forbidden in orthodox ecclesiastic music to this day) which was sent to the Western Empire as a gift to the Emperor Pipinos in 757 AD.

The Byzantine musical instruments were similar to ancient Greek. Both men and women, called "pegniotes", played those instruments. At least two kinds of musical ensembles exist in the palace music performances: a wind and percussion instruments ensemble (band) and a stringed instruments ensemble. Instruments also mentioned, as parts of palace bands were horns, aulos (more like the zourna), flutes (like the syrinx), cymbals and drums. Musical instruments found in Byzantine stringed ensembles were lutes, dulcimers, harps, lyras (also called kitharas), four kinds of tambura, the Cappadocian kementzes (Pontian lyra), the pear-shaped lyra and Byzantine violins. The organ that replaced the ancient hydraulis was still used. In the 8th century, that organ was given as a gift by Konstantine the Kopronymos to Pipinos and Charlemagne and thus it was imported to the West as an ecclesiastic instrument. The monasteries used bells and symantra. 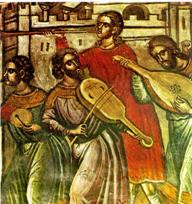 The salvaged musical examples are monophonic. However, heterophony (melody accompanied by its alternative versions and other ornaments) was very common in Byzantium. They also used "Ison"[1], like in ecclesiastic music.

There were "polychronia" for Patriarchs and Emperors.

Music in symposiums, with wind or stringed instruments. Symposiums were feasts similar to the ones of antiquity. Many women organ players participated.

"Teretismata" (syllables starting with "r" or "t" followed by a vowel). Each phrase composed of "teretismata" was called a "kratima". In contemporary Orthodox Church we can still hear psalms with "kratimata". Similar melodies existed in other applications outside the church.

Dancing music, for balls, theatrical performances, etc. We know none of the composers of the social music of this period. However, from later records we know that Ioannis Koukouzelis, xenos Korones and Ioannis Glykis also wrote social music. In the last years of the Byzantine Empire, social music became more acceptable in the eyes of the church.

[1] In the performance of Byzantine liturgical music, the drone-like sustaining
of the fundamental note of the mode by some members of the choir while the
other singers chant the melody